insurrection who's who - fbi knew of do or die marchers on capitol at least day before #trumpwednesday- deutsche bank emerges as main investor in trump- how will eu censor these disgusting financiers? warp speed = one third of vaccine shipped used as at 1/12; vaccine ai had 6 months to map- which nations cared most/least for their peoples?
help linkin sdg coalition maps- peru ...millennials rewind usa in 1999 afore 3G mobilisation decade- sample of cluetrain signees 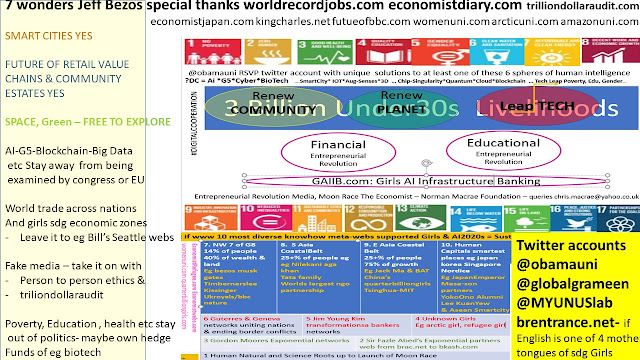 our story - obamauni.com was one of first research webs we started back in 2006- @obamauni if you could be alumni of every "yes you can" knowhow of obama what would action learn and what alumni student club lists might you linkin -tell us chris.macrae@yahoo.co.uk if we have failed to share any learning from obama that an AI teaching assistant would now be able to share across 5th grader classrooms- in other words if a version of alexis was built round obama's world how would it help students , teachers, parents replicate obama yes you can livelihood solutions across communities in usa and beyond
Posted by chris macrae at 1:04 AM No comments:

what has happened to mr trudeau - back in summer of 2017 he was asking jack ma to help educate every canadian www.gateway17.com now he's doing this

Chang'e-4: Yutu-2 to nap to protect against midday heat after surviving -190 C nighttime

Wang is the most common surname in China

CHINA FACTOIDS  Did you know that...

The Battle of Dingjunshan (1905) has the distinction of being the first-ever Chinese film. Read more

Canadian Prime Minister Justin Trudeau fired Canada's ambassador to China, John McCallum, on Saturday, after the envoy said it would be "great" if the US dropped its extradition request for Huawei CFO Meng Wanzhou.
McCallum told a Vancouver newspaper on Friday that if the US and China reached an agreement on Meng’s case, the deal should include the release of Michael Kovrig and Michael Spavor, two Canadians currently detained in China for what many analysts believe is an act of revenge for the detention of Meng.

He was quoted as saying: “We have to make sure that if the US does such a deal, it also includes the release of our two people. And the US is highly aware of that.”
On Saturday, Trudeau fired McCallum over the comments, thus further deteriorating relations between Canada and China.
“Last night I asked for and accepted John McCallum’s resignation as Canada’s ambassador to China,” Trudeau said in a press release.
According to the PM, Jim Nickel, the deputy head of mission at the Canadian Embassy in Beijing, will now represent the Canadian Government in China.
He also thanked McCallum, a former cabinet minister, for his 20 years of public service.
Meng Wanzhou remains in Vancouver after being arrested last month, and is confined to one of two of her mansions in the city after making US$10m bail. The US plans to pursue an extradition case against Meng on allegations she helped Huawei circumvent US sanctions against Iran.
Posted by chris macrae at 2:48 AM No comments: