in 1972 dad The Economist's  norman macrae wrote first of his future history of entrepreneurial revolution series in the economist - many now value as pivotal to industrial revolution 4 -
1968-1972 saw 4 extraordinary years in terms of continent americas impact on the world as its spins millennials today  -adapting one of de bono's creativity frameworks, we recommend youth code these historic tipping points as
U-Unsustainable
S- Sustainable
A -Actively (in play)

1S Sutstainable was way south americas led by Peru/Columbia came up with a new search for hope = they called this Preferential Option Poor (POP)  for youth of any goodwill faith, and liberation theology for the branch of Catholics that trace their cultural values back to Francis (Brotherhoods) and Clares (sisterhoods) of Assisi circa 1210. Recall that Catholocism came to south and central america from old world colonists primarily spain and portugal- so it was high time for southern hemisphere to choose its own future meaning. And POP can be recommended to every child who starts to be ready to explore society and love thy neighbor

Crucially this southern hemisphere movement demanded from the richest a reframing of worldwide aid . How about celebrating accompaniment with the poor instead of top down politicing or preaching

POP can apply to how a missionary nurtures faith, and diversely to how love of the poorest sustains communities wherever professionals live their service to the limit by :
1 living with the poor and adapting their professsional skills to community service and empowerment
2 observing system traps chaining the poor beyond any singular professional skill and thence collaboratively  linking together all professions that may be bottom-up needed to transform the system
3 believing its a sin (or at least not fitting of leadership reponsibility) to fail to use any advance in modern technology as a priority liberation app for and with the poorest

The clearest professional app of POP was started by the anthropolgist Paul Farmer in 1982 and became partners in health with jim kim and others in H&H (twinning Harvard and Haiti). All of the values of this medics network are anchored in the 1968 origins as Paul explains in this video

2S The same culture was to be adopted by the Muslim development world starting in 1972 with the foundation of BRAC where sir fazle abed credits Paulo Freire's Pedagogy of the Oppressed- the leading text of applying POP to education or training. Today BRAC is the world's largest NGO as well as the one that most value POP with special emphasis on women and girls. It has at least 7 practical wings- with its health practices frequently swapping knowhow with PIH. Indeed if you attended the 20th Open Society celebrations of Gorbachev and Soros in Budapest in 2013, you would have found celebrations of both Sir Fazle Abed and Paul Farmer

1U the US decade 1963-1972 was extraordinary
assasinations of 2 kennedies and king
end of segregation, war, arms races and peace movements
moon race, innovation of satellllites and silicon chips

but one arguably the longest exponential impact was american elders turned against investing in student graduates- witness how Nixon called the slaying of students at Kent State University a consequence of youth behaving as bums, and was surprisingly re-elected - whilst there was initial public outcry to the bum labeling, elders in america had turned neurotic instead of entrepreneurially joyous- see The Economists Neurotic Trillionaire -legacy starting up America's 3rd\century. From this date the idea of putting university students in ever greater debt, and the end of the university as a pro-youth public partnership is clearly evident- as is the end of USA being a leader that worldwide youth can trust to sustainability

A1 so what are we to make of POP songs like Lennon's Imagine in 1971
over the next 45 yerars pop stars became ever more costly as well as famous; youth came to celebrate anything but real heroes with advertisers greenwashing those who locally made the greatest innovations in sustainability and jobs creating learning; and yet if we could design a university of stars in such a way that the inaugural lectures were inspired by eg Kim and Farmer (and offereed on open elarning channels across 4 hemipheres of our planet) maybe POP realty and image could twin around millennials sustainability in time to heed UN's last call
i

Posted by chris macrae at 7:56 AM No comments:

hello sounds exciting --some questions- is there a bookmark to register- do you know theresa williamson catcomm hubs in rio or mary young the number 1 educator i can find linking education brazil-china or bedy yang the number 1 veuture capitaist linking brazil and china women enrepreneurs see 500women hub- who is the movement you most trust to raise your issues at argentina g20 - who in rome do you most trust given that franciscan paulo freire is epicentral to bottom up girls education around the world - i know sir fazle abed the nunber 1 living practitioner of girls livelihood empowered by pauli freire -sir fazle was also george soros 20th open society laureate- which networks around you linkin with  pope francis most urgent social action networks chris.macrae@yahoo.co.uk norman macrae foundation journalists for ending poverty www.normanmacrae.net washingtondc whats app 240 316 8157
Posted by chris macrae at 4:44 PM No comments: 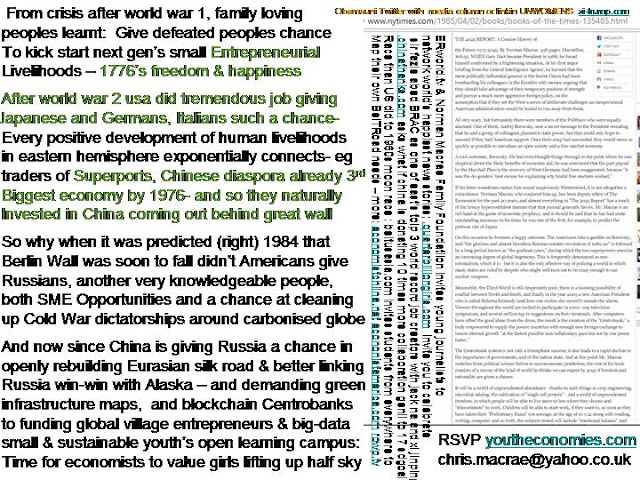 Posted by chris macrae at 9:04 AM No comments: