notes on valuing freedom and happiness

We interpret freedom and happiness in the first sentence of 1776 America's D of I as valuing livelihoods as most fundamental human right - by which we mean if people, family, community work hard to serve other people there should be marets providing a fair chance of making a decent livelihood, particapating in mother earth's wonders

His bio "sometimes brillaint" tells a wonderful story- brought up in detroit he was feeling a bit miserable (family death, toothache) when he accidentally walked into a medical college and instead of being given a drug the dean asked him if he would like to study to be a doctor - in those days the cost to larry to start up as a health entrepreneur- 350 dollars - was affordable

Anyway his first job was being hired by a film studio (coincidentally the one that later aquired america online) to look after their rock stars as they toured the world- somehow this took larry and the young band from california to europe- where filiming finished this young group decided to drive overland across eurasia and go  see the band's favorite guru who happened to live in some village north of india , probably in afghanistan - this was 1960s - in many villages larry passed through there were photos of president kennedy; to be in the middle of inviting humans to race to the moon inspired the world, freedom and happiness were seen not just as american dream but every community's dream for their kids

You can ask two what happened next questions :

1 to larry, he stayed in india, built grassroots webs (long before the web or the mobile) which were needed to end smallpox; later his story caught the eyes of the founders of google.org who appointed larry to be their first leader of do no evil ...

today the worldwide sustaianbiliuty crises are about exonentially losing of goodwill between peoples (losing the chnace of every hard working family to thrive) in the race to global village value mapping
they are caused by professional being vain in every way that brilliant was modest; you dont need to be a mathematical genius to know that if a large organsiation is audited only around taking as much from everyone elese every quarter that cannot lead to sustainability across generations- it will lead to destroying financial systems as english speaking subprime analysts did

Ron's frined- BBC Nature broadcaster and Polar Explorer says this
actually if we go back to 1500, this isnt the first time english speaking people "accidentally" lost freedom and happiness around the world; if you look at statistics up to 1500 then economies were largely people centric and across Eurasia neigboring spaces from lebanon to hangzhou participated in win-win trading exchanges- india and china being the most populous nations also had the biggest economies;

what happened next was mercantile colonisation led by the English Empire which turned the whole south coastal belt of Eurasia into the opposite of free trading zones - ie a west-east in which english gained and locals lost (quite literally britannia rules the waves, britain never never never shall be slaves means making other slaves is part of the mercantile job descritiption , part of the empires system of education of confining youth to classrooms - see also gandhi's 1906 identification of that problem)

other europeans rushed to colonise too; south america was colonised by spain and portugal; africa by english, french, dutch and others... to the extent that the world from 1500 to 1946 took a wrong turn in connecting dismal macroeconomic human relationships (trading models of siloised societies and economies and cultures) English language/navies etc networked this error;

there is another question - if ending poverty (and racing to all 17 sustainability goals) means mapping a world in which economies become roughly correlated by size of population, does this mean that peoples in rich nations are going to need to make sacrfic?

; we dont see that as necessary; we believe that now that 2016 has 1000 times more connectivity tech than 1946 all nations peoples livelihoods can be riased up to the wealth and health of the best nations to grow in  --however it is true that there may need to be more equality within nations- fir example the 10 richest people in the world cant go on owning more than the 40% poorest; and men cant go on owning 10 times more than women)

in any event we recommend 2 lessons

Belt Road Imagineering is a literacy, a 'language"  that can translate happiness across cultures should we free youth to do this; it is a necessary tool if parents truly want their children to be the first sustainable generation, and yes thoise who speak english need to help resolve conflicts that they designed into huan development 1500-2000- they should end fame media, and they should have the courage to turn up to ever cluster of nations summits looking for clean climate or new banking investments or edutech which takes learning out of classroom into action networking good services through every commuity the way a world champion like larry brilliant shows us joyful ways ahead

Do you feel that big western nations don’t yet have a clue about sustainable models of markets of 1 health 2 banking 3 education 4 energy distribution? Published on April 6, 2018   cf 1999 www.cluetrain.com  cf since 1984 openspaceworld.com

Posted by chris macrae at 3:15 AM No comments:

Exponential Growth in Silicon Chips, reporting from The Economist August 1976 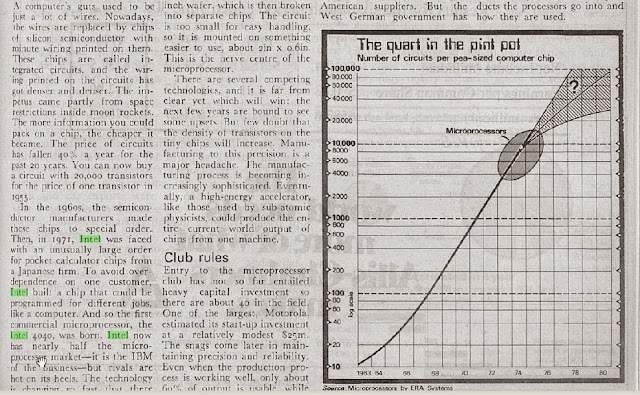 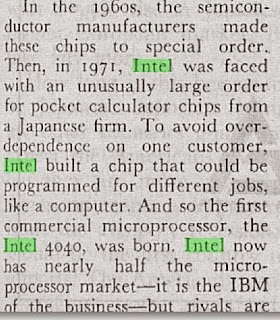 Posted by chris macrae at 9:22 PM No comments: