Posted by chris macrae at 3:12 PM No comments:

Posted by chris macrae at 8:18 AM No comments: 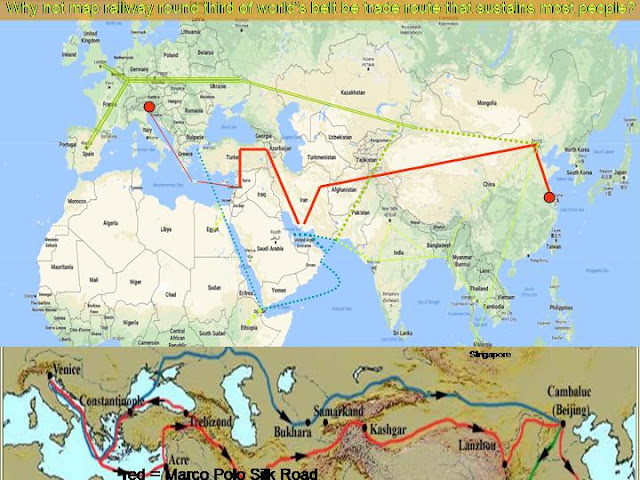 Posted by chris macrae at 7:02 AM No comments:

one small step for man, a large leap for mankind

In 1969, my 18 year old mind and more valuably that of my 46 year-old father Norman Macrae The Economist's end poverty economist saw it hopefully as all of these opportunities.

The entrepreneurial revolution question to debate with everyone: what compound opportunities and risks could happen next?

The one thing we would bank our livelihoods on (and anyone who would listen) was that the doubling of spend in global communications every 7 years that had started in 1946 would continue on for many more 7 year periods quite likely through the furst quarter of the 21st century.
In other world by (say) 2030, 4000 times more would be spent on worldwide communicatiosn in treal terms than in 1946.

This would be an inter-generational revolution in the human,lot that dwarfed any other human revolution from the invention of the printing press to the steam engine that begot the industrial revolution.

We were not betting this on just the word changing event of the moon landing alone- the year before  intel was founded with the Moores law goal of doubling silicon chip power to analyse every 2 years or so.

And we believed that back on earth the huge productivity story would come from satellites death of distance- ie the cost of telecommunications would within a couple of decades be no longer dependent on whether you were communicating next door or around the world. That suggested everyone should be free to maximise virtual livelihoods as well as what histiorically was known as real productivity (conventionally counted by economists in boxed silos called GDPs)


In father's view, it was essential to move on the debate of advanced economics from: zero sum trades of making lifeless things to service economy where peoples emotional passoin as well as grwoth of experiential learning was the primary driver both of economy and society to knowledge economy- which we could define as taking value way above zero sum models; because actionable knowhow can multiply value in use unlike the consuming up of hings . In parallel, ending poverty in village economies would require openly collaborative innovations (and sustainability mapping) never seen during the industrial revolution -

EXPONENTIAL THREAT If the world biggest future organisations (some already larger than all but 5 nations economies) continued with tangible zero sum auditing: where success is how much you quarterly extract and externalise not how much you sustain and collaboratively win-win (NB economics of networks of systems need organisation-wide maps/charters for seeing far more than the sum of their parts) then the world of 4000 times more global communications and technology more analytically powerful than individual human minds would spin the way of Orwell's big brother scenario (in fact all Orwell's advisory had got wrong was a timeline one generation too early- if big brotherdom spins hyperconnectivity it will drown/lose much of the generation starting in 1984, and accelerate collapsing systems, failed states, ultimately catatrophes that man has scaled up to natures planet-wide scale)
EXPONENTIAL OPPORTUNITY 1984 to 1972-Norman Macrae's 4 major Futures Reports with The Economist
1972 The Next 40 Year -where communications revolution changes humanity and the planet
1976 Survey of The Coming Entrepreneurial Revolution
1982 We're all Intrapreneurial Now- service economies already produce more value than tjhing economies in world's richest nations- what does this mean for productive economics 1984's
2025 report mapping timelines of whether millennial generation will be invested in by their parents to compound sustainability exponential risings of r the opposite

UK "Khan Academy" 1972 (Details to come)
The opportunity scenario blossomned around dad and me when almost by accident we became involved with the UK national Development Porject for Computer Assisted Learning - starting in 1972 with dad as an obesrver turning CAL explorations into leadership debates of nerepreneurial revolutiion at The Economist and myself as first employer after postgraduating in statistics at Corpus Christi University of Cambriegde - a college (arguably one of Cambridge's most community caring and cross-cultural -eg after father's stint there ending in 198, manmohan singh was soon to arrive and his tesis was on ending underclasses within and across national bodrers- something of great interest to him as an Indian refugee from west pakistan - more at accidents of macrae family tree and 25 years of gandhi mediation) that generation on both my paternal and maternal family tree had experienced. What I didnt know when I first feel in love with khan academy style open elarning netwirks was that American societyhad come to fear youth so much that USA was hell bent on making university education expensive- chainging student in future debts. I had ever nbeen to USA as at 1972. I wasnt really aware that down on the ground- there were shootings iof students at Kent state not borderelss celebrations of moon landing. I wasnt aware that elders in society were so ftighterned by such belated dynmaics as end of segragation and the way mass media manipulated theur efars that they would re-elect the sort of nixon that would call jkent state students bums. In other words, while it seemed to me obvious that if humanity was destined to spend 499=0 times more on worldwide communication, we needed to be designing the smartets open elarning m,edia not more of the mass tv comansd and control tv adevrtising industry, I wasnt aware that the USA as a whole was not the nation most liklely to celebarte open learning networking as fast and as deeply diversely as humanly possible This is another reason why in journalising the story of te human lot's outcome from spenidng 4900 times more on communications, I would advise very millennails to celebarte waht open collaborations advancing hyukan livelihoods progressed from 1946 at www.economistasia.net www.economischina.net www.economistjapan.com www.economistbangla.com www.economistyouth.com www.econokmistyouth.com www.economistafrica.cpom not just www.economistamerica.com
Posted by chris macrae at 11:30 PM No comments:

Email ThisBlogThis!Share to TwitterShare to FacebookShare to Pinterest
The truth about the world before 1946

If you lived in a place with more than 10 million people, and most of them could live within 40 miles of the sea, and you hadn't been colonised- then most of your people were now advancing way beyond subsistence- a growth dynamic of up to 200 times more wealth and health (eg more than doubling of working life expectancies) made possible with the dawn of the industrial revolution.

Before the 19th century, kings and their armies lived well. More or less everyone else at subsistence level. There may have be a few local civilisation exceptions -some by the sea, the other with very deep cultural designs no longer widely understood

Arguably the USA beacme a lasding exception as the 20th C dawned- while most people did live within reach of the sea (or big rivers) it wasnt a colonial power in the traditional sense, it built highways across the country faster and more abundantly than anywhere else. Oddly this big market inside meant that a nation that had been built on imigrants had relatively small interest in global trades until world wars chnaned everything

Notwithstanding colonial issues, the problem caused by huge inland continents was that the industrial revolution had no economical answer to reaching them with electricity grids or running water or communications. And remembering that televisual news did not reach masses of people anywhere until after 1946, unless you were a missionary you (and your social network) probably didnt know much about rural peoples abroad, and in some large continents not so much about your own rural peoples.
****
Thus it was that spnending on wordlwide communications made possible what the industrial revolution had not. Ending about half the world living in susbsistence (or what we in 21st C the extreme poverty of less than $1.5 dollars a day)

It seems to me that what we needed to design into worldwide communications as these blossomed from 1946 was every opportunity to celebrate ending of poverty -wherever this came from it could have been a collaboaratuve joy. After all peoples getting linked into electricity, water , health, communications including education does not take away from your advanced lifestyle. Or if some would say that it introduces ecological conflicts. I would counter that the planet's solar and water systems are abundant enough by a long way provided only we transform beyond carbon based energy systems.

This passage isnt supposed to be absolutely precise, bur rather a rough guide to post-indsutrial revolution . To the future of being human that anyone coming of age after 1946 could have wanted to link into - the more so as doubling of worldwide communications spends every 7 years  became an unstoppable movement from 1946 to 2030
Posted by chris macrae at 8:45 AM No comments: 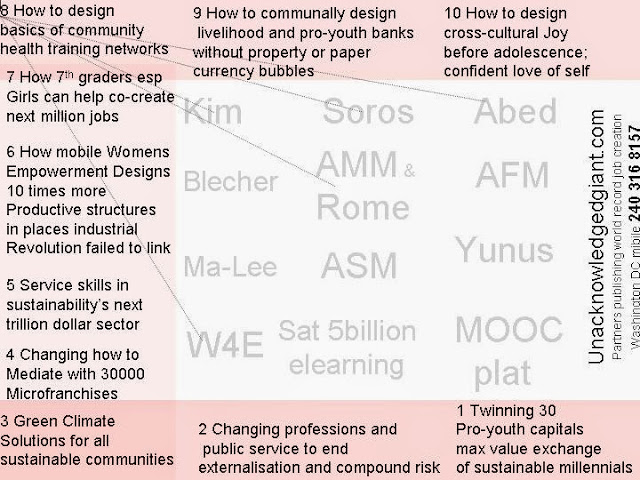 Posted by chris macrae at 3:00 AM No comments:

Posted by chris macrae at 2:30 AM No comments: