what were main lessons of 60s beyond space race

Entrepreneurial Revolution's  main lesson from the 1960s was the need to design markets and worldwide trade in ways that went beyond the era of industrial revolution and colonisation. why because the first quarter of millennium of engine power had resulted in very uneven opportunities to live an innovative and happy life. Whist one group was racing to the moon, as many as half of the world's people still had no access to electricity grids nor other structures of productive markets (eg telecommunications, transport and distribution channels beyond mud-paths) why had the industrial age deviated into this world of missing opportunities- because colonisation had become the process or organising win-lose trades in which the empire won and the colonised lost; and those nations that had become biggest raced to use more and more carbon and steel even if this meant warring over other countries' resources.

The good news was that the east had innovated post-colonial models of win-win trade: starting with japan then south korea, then the mainly chinese diaspora operated superports which connected the hemispheres internal and worldwide trades; by 1970 the japanese were the 2nd largest economy to usa and the 3rd wealthiest group in the world were the Chinese diaspora; all of this was the ultimate kicker to mainland china coming out from behind the Great Wall and seeking to be the world's most positive trading influence the way it had been during the celebration of the silk road as world trade route connecting Eurasia during the first half of millennium 2

south america convened a continent wide debate - while colonisation had formally ended the question what do we like about the catholic culture and languages we have inherited. A movement rose that the franciscan segment of catholicism was what latin americans loved most. This is where you judge your most educated professionals by whether they go and live with the poorest and preferentially apply technology and innovation to solutions they need to free themselves from such system traps as having no access to electricity; when it comes to learning paulo freire mapped out what the education profession would empower if it lived up to franciscan values

ironically as the cold war spread across latin america, the opposite to franciscan-democracy of governments led by servant leaders spread; rival dictators were sponsored by america or russia and banks loaned money to their individual interests (putting the peoples/youth in future debt); often this process also made neighboring countries in latin america hostile to each other, and to survive the poorest were often overtaken by illicit drug trading networks  ; conversely by good fortune returning to the eastern hemisphere:  bangladesh which was finally to free itself from colonisation in 1971 needed a bottom-up development tool so that the 8th most populous nation could be develop by girl empowerment from basket case to something even more inspiring than the moon race; the bottom up village womens networking -especially brac - were based on franciscan values with their leaders choosing to live in the most desperate places first - brac started in the region where a million people had been killed and all infrastructure flattened by a cyclone; bangladesh's first national governments barely had enough taxes or aid to develop the cities; so the greatest privatisation of public services (all  the most socially critical service markets; health, education, finance, food and home security, with markets designed for poorest to flourish) evolved around grassroots village womens networks.

Bangladesh application of franciscan ways was then  - and remains now - the deepest collaboration system and source of action learning for poverty alleviation and responding to any community's most desperate sustainability challenges ;meanwhile north of the border: mainland chinese with the inward investment of chinese diaspora has leapt into being the 21st benchmark of infrastructure for all.

bangladesh and china share one more good fortune- the first leapfrog models of both mobile and microsolar tech were tested by partner friends of bangladesh in 1996; china's jib creating technologists for the poor like jack ma have taken such innovations to a world class level but whether they would have been inspired to do so with the case of how bangladesh women lifted up half the sky remains a moot point in 2018 as we entered the last decade in which it will be possible for education to be transformed so that all girls and boys can be the sustainability goals generation
Posted by chris macrae at 11:30 PM No comments:

Email ThisBlogThis!Share to TwitterShare to FacebookShare to Pinterest
Posted by chris macrae at 4:22 AM No comments: 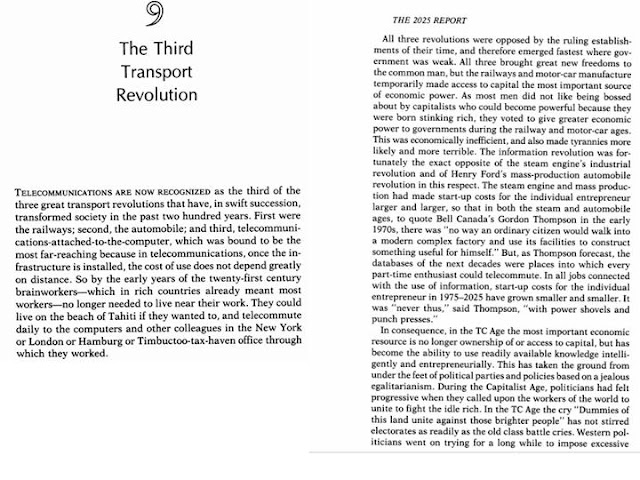 Posted by chris macrae at 5:31 AM No comments: 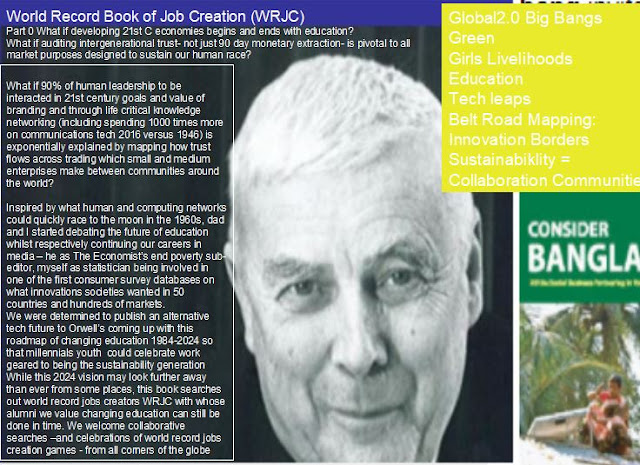 Posted by chris macrae at 4:01 AM No comments: 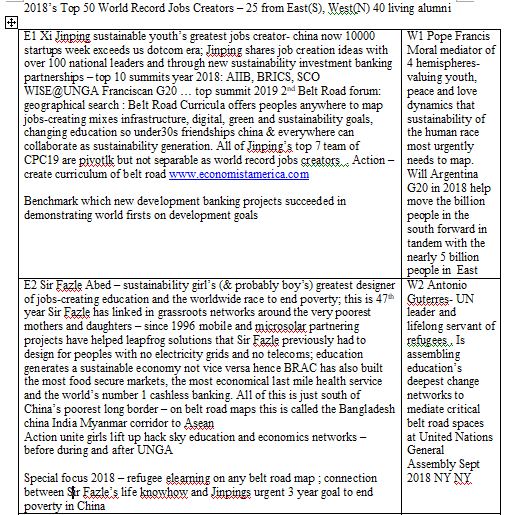 Posted by chris macrae at 3:57 AM No comments:

Hydroelectric reservoirs, which greatly expand a river's surface area, can increase water losses through evaporation by 10% of the reservoir's volume annually (98B3). Comments: This rate varies considerably with temperature and aridity. (This data is also in dam data above)
(Reservoir Evaporation) In the US Colorado River, 32% of flow is evaporated from reservoirs (Ref. 23 of (se94D2)), and 64% is consumed by irrigation (se94D2). ("se" means the soils degradation review)


(Irrigation-Related Waste) On average, no more than 50% of water withdrawn for irrigation purposes actually reaches crops. It soaks into unlined irrigation canals, leaks out of pipes and evaporates on its way to the fields (98H1).
Posted by chris macrae at 3:08 PM No comments: