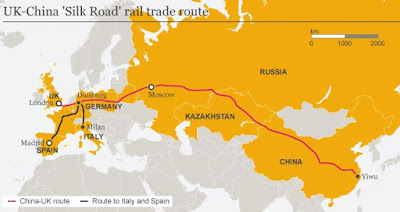 YES YOUTH AND TEACHER CAN SEARCH FOR MOST IMPORTANT INFO OLD PEOPLE HAVE NEVER LOOKED FOR IN LOCAL DETAIL
example: why goal 2 food security for all  communities depends not just on belt road but on how everyone partners round water intelligence and good food imports into china as 750 million middle class become wisest consumers
Part [B7] ~ Water Use ~ Asia Generally ~
Dwindling groundwater supplies are threatening drinking water and crop production across Asia. Undeveloped arable land, meanwhile, is in short supply. As a result, Asian countries will have to import more food or improve irrigation methods, the UN Food and Agriculture Organization (FAO) and International Water Management Institute (IWMI) concluded in a report [PDF] released today. "Revitalizing Asia's Irrigation," IWMI (International Water Management Institute) http://www.iwmi.cigar.org/Publications/Other/PDF/Revitalizing%20Asia%27s%20Irrigation.pdf by Aditi Mukherji, Thierry Facon et al. (2009)
Asia's irrigation systems account for 70% of the world's total irrigated land. About 5 billion people are projected to live in Asia by 2050. With demand for meat products on the rise, experts estimate that the region must double its supplies of food and animal feed crops during the next 50 years to feed an additional 1.5 billion people. If population projections are borne out, food demands by 2050 would require South Asia to irrigate 30% more harvested land. These new farms would demand 57% more water unless water efficiency improves. In East Asia, farmers would need to increase the amount of irrigated farmland by 47%, at the cost of a 70% increase in water use, the above-mentioned study said. In Asia, particularly in South Asia (e.g. India), the area of land irrigated by large-scale surface irrigation has declined since the early 1990s due largely to poorly maintained infrastructure, the report said (09B1). Comments: "Surface irrigation" probably refers to irrigation systems that use surface water instead of groundwater irrigation.
Go to Top of this Chapter-Water Supplies for Irrigation
Go to Top of this Review's Reference List
Go to Irrigated Land Degradation: A Global Perspective (Table of Contents)
Go to Home Page of this entire web site
Posted by chris macrae at 7:34 AM