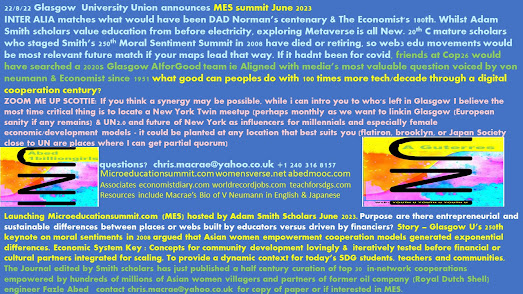 1 billiongirls.com Reality is even more curious than mediating rational optimism

It starts with women empowered to build 100000 person communities at a time - to be self-sufficient, resilient and as safe for girls as for boys

revolution in aid: mainly with microfranchisee business not grants but where aid partners were found a world class solution was designed so everywhere (and every type of government and media) came to learn for 1 billionwomens development lab. This mattered because there are endeavors like education and changing infrastructure (energy, tech, trade) that needed intergenerationl funding by taxes- cannot be done be private finance bowling alone. Over a generation the world poorest community rising women became inspiration researchers of top-down governments, youth's celebrated storytellers and inspired tech wizards to join in the deepest learning human and tech intel can blend

IT HELPED THAT MACROECONOMISTS HAD GIVEN UP (BANGLADESH 8th MOST POPLULOUS NATUION IS BASKET CASE) and the SERVANT Leader (microfrnachise designer)  of this 90% rural nation had bene Asia's leading young oil company engineer (CEO Royal Dutch Shell East Pakistan). In 3 life changing years a cyclone killed a illion people around him; the war of independence killed another million leaving massive village destruction; a famine like no other had begun the nation;s birth. Rice needed to be the first microfranchise; the second microfranchise needed to start building last mile health services to raise life expectancy from 25 below world average.

Back from the 1970s Scaling supply chain for 100000 people microfranchise also meant that women designed the wholesale (value chains) & R&D of national markets that needed to be integrated round development of the poorest. Where this began the poorest village women had to network for 25 yeras without access to electricity. Learning was by word of mouth and once literacy had been gained by practice curriculum the women helped design and teach

By becoming valued as worldwide development lab, from 1996 best partners of village women entrepreneurship brought mobile and solar. Leapfrog models began to emerge - what if you skipped the age of wiring a contient and went straight to satellite coms and solar energy. The women celebrated the new millenniums goals by founding a d=girls university valuing both digital collaboration and deepest trust data of renewing communities in such a way that wherever the next child was born she had a good chance at lofe and livelihood.

The question was partly would enough web-based educators join in the transformation and university alumni share their graduates at least on sdg project innovation. The University was designed to serve multiple development visions:

If the first  (least resourced ) ne millennium university could achieve 4 such collaboration projects - would other better resourced universities join in with at elast 1 50 million good jobs innovation that their girls graduates share with girls alumni of the 2020s in time for the sdgs to be reality not greenwashing> Fazle Abed spent much of his 19 new millennium years debating this with every asian and other ambassador who wanted to explore this education revolution. Abed did not get to see web3 or guterres year of researching old edu not fit for purpose but what will all his 50 years of partners in women building bangladesh do now . Could it be that me-too des mater as much in America as Bangladesh as China as Developong girls and boys everywhere mother earth shines down on human and and artificial intel through the 10 decades of 100 times more tech.

COMING SOON DEBRIEFS FROM FIRST BOOK ON VON NEUMANN FOR 25 YEARS: MAN FROM THE FUTURE
EMERGENCE OF AI HALL OF FAME & UNIVERSITYOFSTARS.COM with special mediation support from 1billiongirls.com
oct-dec 2021
kerry billed glasgow novemeber as climates last chnace;
gordon brown exctended this to 7 ast chances
covid how another last chance took over priorities
all in all we need to start the first of 7 greatest learning quaretrs everywhere
ABEDmooc.com
a billion women have offered a map of 36 deepest COLLABS around sgds 1 to 5
but who's up for the english mindset to face up to politically divisive truths (mathematical valuetrue hypothesis of expoenential multipliers: what 2000 candidate presidents called inconvenient is now every girls last chance to unite what children need from S of ESG ie 5 loving community 4 skils education 3 health 2 food 1 investment in combo of servant leaders and future purposed business)

100 ways for 200 countries girls & boys to love & sustain communities and education - We hope to unite 100 ways of announcing this joyful cooperation from North East West South. Here is one way my family knows a little about as alumni of both Adam Smith and 1843 purpose of founding the Economist and development by the Gaots of mathematics of AI as potential saviour of the human race 30 leaps in 1 billion womens productivity & human sustainability from 50 years of Fazle Abed Entrepreneurial Revolution -pdf

in Fall 2017 we did not know our last of 16 meetings was happening with Sir Fazle Abed - in our last conversation he hoped edtech luminaries would continue to support 1billiongirls who for half a century helped a reformed oil company ceo change development of Asia by valuing education as the core of human development -at WRJ we hope Abed would applaud edtech Mr & Ms Metaverses as the race to sdgmetaverseprize.org shapes life everywhere- if you only have time to know of one of abed's top 30 cooperations,